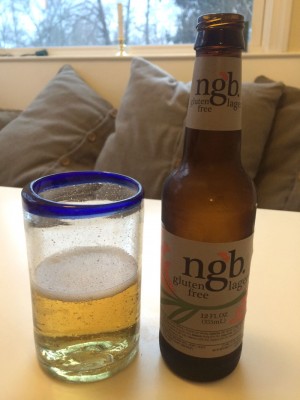 NGB is Trader Joe’s contribution to the world of gluten-free beer.

I’ve been hearing rumors that the local Trader Joe’s finally had a  gluten free beer in stock. Since there isn’t a Trader Joe’s in out town I asked my brother to pick me up Trader Joe’s Gluten Free Beer and he came back with this NGB gluten free Lager. I asked him why he didn’t bring me back a 6-pack and he said he “didn’t want me to be stuck with all 6 beers if I didn’t like it.” Funny, just a few years ago I would have drove half way across the state for one decent gluten free beer. Now I get the opportunity to be picky.
By the way my brother made the right call. I can’t imagine a situation where I would ever want to drink 6 of these.

From what I can gather about this beer, Trader Joe’s contracts Minhas Craft Brewery to brew it for them. There is no website for the beer itself and the Minhas website has several of it’s own beers, including it’s own gluten free offerings, but also a big section about
Private and custom label and contract packaging, leading me to assume that Trader Joe’s contracts this beer out to them.
My biggest question is this: what does ngb stand for? Leave me a answer in the comments if you know.

Overall this beer was very light and watery. Not much flavor to report. I’m not sure why this beer is considered a lager, but there is little in it that I would equate with the taste of a lager.

However, this is the first gluten free beer that I’ve seen available at Trader Joe’s, and its made from sorghum, so its a true gluten-free beer. For these reasons I salute ngb and Trader Joe’s (raised glass).

Pours very light and watery with a golden yellow color and a foamy white head that was gone in 30 seconds.
The smell is of barley with a hint of sweet honey.

The taste is very a light toasted barley with a sweet apple. This beer shares several characteristics with a light apple cider. I can detect a hint of our old friend sorghum, but just slightly. Props to the folks at NGB for doing such a job of hiding the sorghum flavor, but they seem to have gotten rid of the rest of the flavor at the same time!

The NGB body is light and watery, with medium carbonation.

Overall, If it was a hot day and I was looking for a light beer to just quench my thirst, I’d reach for this beer instead of Redbridge, but I’m afraid that’s the best thing that I can say about this forgettable lager.

Body is slightly caramel color with a light bubbly head. There is a small amount of visible bubbles in the glass. The smell is strongly floral from the hops. At the first sip I tasted was a dry and bitter, quickly replaced by the hoppy taste. The finish is very smooth with a slight bitter aftertaste. This clean finish is not at […]

Omission Lager has become on of my staples. Because it has been picked up by so many grocery chains, it is one of the beers that friends and relatives will often have ready for me if I’m visiting their homes. This gluten-removed beer has that barley-taste that many long-time gluten-free people (like me) miss, and the […]