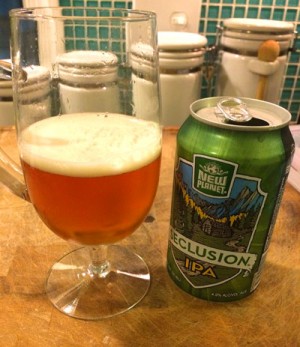 New Planet Brewery, known for its sorghum-based gluten free beers has brought us something new and different. Perhaps this gluten-removed brew is called Seclusion because its so far and different from New Planet’s other gluten free offerings. To further differentiate this beer they have offered it in a 12oz can, not a bottle. In fact this may be the first gluten-free beer I’ve ever had served in a can.

Tasting Notes:
This IPA has a frothy head with a golden orange tinted body.
Lots of floral and citrus notes in the smell along with some toasted barley with the distinct taste of grapefruit.
Creamy and a little watery, this beer has the taste of a well-crafted IPA (India Pale Ale).
Finishes with the slightly bitter taste that you would come to expect from a well-crafted IPA.

Brewed by the New Planet Beer Company, Boulder, CO.
4.9% Alcohol by volume
Ingredients: Barley, Malt, Oats, Hops, and Yeast
New Planet makes the following statement about this beer: “New Planet Seclusion IPA is fermented from grains containing gluten and crafted to remove gluten. The gluten content of this product cannot be verified and this product may contain gluten.”

The flowers on the label aren’t just there for decoration, they seem to be a reflection of the contents in this hoppy gluten-removed beer. This self-proclaimed “West Coast Style” India Pale Ale has a light-blonde color and a strong, flowery, lavender smell.  In fact, my wife said, “It smells like purple.” This double IPA really does has double the flavor of some […]

Sometimes I find out about a new gluten-free beer far in advance and eagerly anticipate their arrival in my area to taste it. That didn’t happen with this beer. Instead, I recently received a phone call, “I’ve got a new gluten beer for you to try”. And just like that, a totally gluten-free IPA, that […]

Not everyone likes India Pale Ales (IPA’s), and that’s because they can be very overwhelmingly dominated by the strong, flowery, yet bitter taste of hops. However, for those of us who like IPA’s, we really like them! If you are a fan of IPA’s, then I think you’ll like this one. The Story Behind India Pale […]