Glutenberg calls this beer “the true flagship of Glutenberg Beers”, and after tasting it I can see why.  If you are looking for a good gluten-free American Pale ale (APA), look no further.

Glutenberg has some strong beer offerings, including the 2016 Gold medal winning India Pale Ale. So when They call this beer their flagship, that is definitely something to consider.

The challange with an good Amercian Pale Ale is to make it Hoppy enough to satisfy the “Hop Heads” out there, but also well-balanced enough so others will enjoy it as well. In my opinion, the over-the-top Hopped beer drinkers go right for the India Pale Ales, where all of their hopp-cravings are satisfied. I’m going to put muyself out there by saying  that this APA will satisfy both audiences; It has plenty of Hops, but it’s well-balanced and finishes without the bitter taste of an IPA. 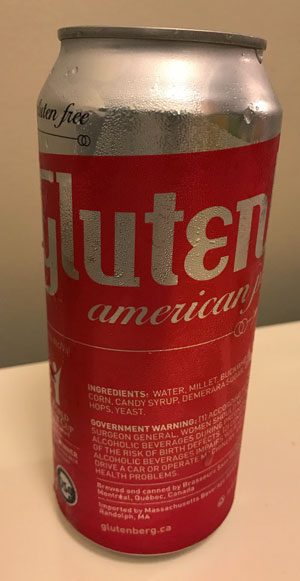 Taste -caramel with grapefruit and apricot, a hint of sweetness and a smooth finish.

Overall – hoppy, but well balanced and a smooth finish makes this beer tasty and drinkable.

Kombucha beer has emerged as an entirely new style of beer. Combining the health-centric characteristics of fermented Kombucha tea, with elements of traditional beer, this hybrid brewing process has created a new, and interesting new category of naturally gluten-free beer. This one-of-a-kind K.P.A. (Kombucha Pale Ale) is my first foray into Kombucha beers. In terms of tasting, this drink really was […]

I’ve been meaning to try this organic Belgium artisanal ale for several years, but it isn’t readily available in the area of North Carolina where I live. When I ran across it recently I bought a bottle right away. After trying it for the first time I wish I would have brought a six pack. Brunehaut […]

If there is one type of beer that I really miss from my “normal” beer drinking days, it’s dark beers. I’ve yet to taste a gluten-free stout or porter. There are a few dark beers out there, but there isn’t a good selection and many are hard to come by. After tasting Gutenberg’s red ale I’m […]

I feel at a bit of a disadvantage when tasting Glutenberg White. This Belgian Wheat style brew is a style that has become popular, and commonly available since the time I was able to drink regular beer. If you ask me to review a lager or an ale my comfort level, and experience with these […]