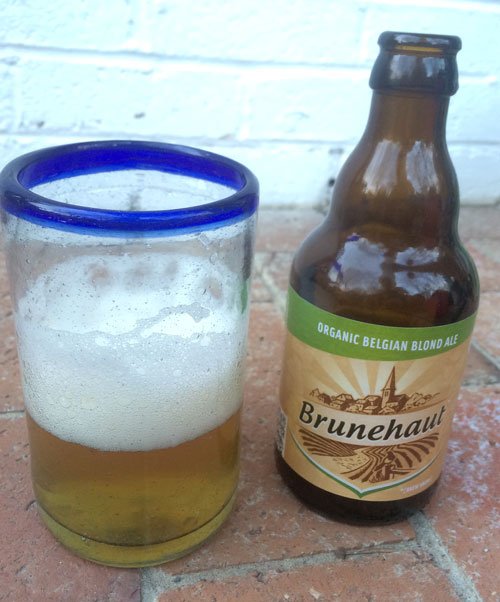 I’ve been meaning to try this organic Belgium artisanal ale for several years, but it isn’t readily available in the area of North Carolina where I live. When I ran across it recently I bought a bottle right away. After trying it for the first time I wish I would have brought a six pack. Brunehaut actually has a few gluten-free beers, and if the others are as good as this Blonde ale, I’ll be stocking up on all of them!

Brunehaut Brewery claims that this beer is brewed with its own barley and uses their own unique and natural gluten-removal process that puts the gluten level under 5ppm. This is well under the 20ppm standard for considering beers (and other foods) to be gluten-free.

As always, I have to warn those of you with Celiac disease that many people believe that despite testing, gluten-removed beers aren’t safe. Speaking as someone who has celiac disease, and is very sensitive to gluten, I did not get sick after drinking this beer, and I greatly appreciate the lower parts per million standard of 5ppm that Brunehaut adheres to with this is beer,

The heady taste of barley ( yes barley) and the smooth, bubbly body and the the dry finish make this beer a keeper.

Smell- very malty and yeasty smell that is slightly floral

Taste – well balanced and drinkable with yeasty, earthy flavors and a dry and slightly bitter finish.

As a young guy growing up 20 minutes from the Canadian border I drank lots of Canadian Beers. The most readily available and in expensive was Molson Golden. This beer brings me back to my Molsen Golden days. Back then it was more about quantity than it was about quality, and Molson Golden fit the bill. This […]

New Grist Brewery, one of the first gluten free brewers in the U.S. has created a new brew which is their pilsner-style Gluten Free beer and Added Ginger to it. This has both of the words ginger and ale in it, but this drink isn’t for kids. This is classified as a beer, but I’m […]

Glutenberg calls this beer “the true flagship of Glutenberg Beers”, and after tasting it I can see why.  If you are looking for a good gluten-free American Pale ale (APA), look no further. Glutenberg has some strong beer offerings, including the 2016 Gold medal winning India Pale Ale. So when They call this beer their flagship, […]

Kombucha beer has emerged as an entirely new style of beer. Combining the health-centric characteristics of fermented Kombucha tea, with elements of traditional beer, this hybrid brewing process has created a new, and interesting new category of naturally gluten-free beer. This one-of-a-kind K.P.A. (Kombucha Pale Ale) is my first foray into Kombucha beers. In terms of tasting, this drink really was […]

This gluten-removed Belgium Ale is an excellent, very drinkable beer, in fact it just became one of my favorite gluten-removed ales. This beer was hard to find, but well worth seeking out. Siason Ale, also known as Farmhouse Ale, is an old Belgium style that is typically brewed in the winter to serve in […]